skip to main | skip to sidebar

The friendly yet challenging and stimulating Education conference was at again:
http://www2.gre.ac.uk/about/news/articles/2012/a2597-discourse,-power-and-resistance-conference2

We were presenting in the Symposium strand: ‘Stimulating or stultifying? Teaching as if education matters’, organised by Eloise Sentito, from ’s Learning Development Team.

There were three excellent Key Note speakers across the three days: Roger Slee, Diane Reay and Bev Skeggs. Roger Slee spoke on the myth of ‘inclusion’, creating a poetic tapestry of references to underscore his points. (Unfortunately I have already shared my notes on his session with colleagues who are interested in Special Needs education so I cannot make detailed reference to his talk here and now.)

Diane Reay, , and previously from my own Alma Mater, London Met, gave a sharp focused key note: ‘Outsiders on the inside: the continuing power of working class exclusion’.

Diane spoke of the current scholarisation of childhood – with a middle class agenda which confers and reaffirms privilege on that class whilst setting up a climate of pathology and blame around working class failure in education.  For the w/class, school offers a mirage of opportunity whilst constructing collective disappointment which is painful and shameful; constructing psychological and social damage. In this system the working class child is systematically and collectively constructed as worthless whilst being individually blamed and stigmatised for their poverty, financial and aspirational; their failure; and their silence. The new hidden curriculum of this age of ‘education’ is the inculcation and normalising of a neo-liberal agenda which for the working class becomes internalised as self-hatred and self blame. Reay argued that our political elites put a lot of class work in to their policies and in ensuring that the w/class are forever and always (blamed for being) educational losers. 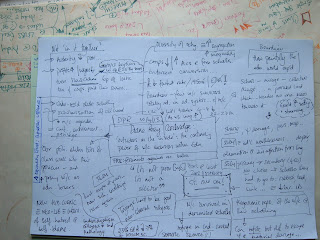 Bev Skeggs’ fascinating and engaging key note reported on her ESCR project: ‘Making class and self through televised ethical scenarios’, which focused on constructions of the shameful (working class) self through reality television (RTV) (www.identities.org.uk).  This was a wonderful consideration of the intended class work of RTV – and a making conscious of the oppositional readings that we can make, aware as we are of the intended manipulation of this melodramatic form. Great points about the ‘moral economy of person production’, the ‘forensic gaze’ of RTV and, as with education, how the w/class are individually blamed and shamed – and invited to aspire to individual transformation at the hands of all powerful experts – whilst structural inequalities and symbolic violence is hidden, denied. 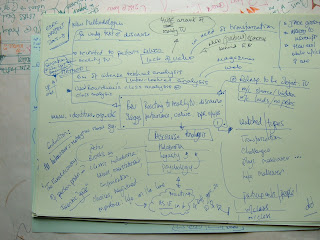 Seminars and workshops
Eloise Sentito: Leader of the Symposium Strand: ‘Stimulating or stultifying? Education as if learning matters’ – kicked off our Symposium strand…

You might notice that is a slightly different title to the one that I keep returning to – but I have left both in this post – cos they capture some healthy tensions in our strand: In terms of a stultifying education, how far is the teacher the issue? How important is teaching? What is the role of learning? What ‘work’ is being done by the new learner-centred rubric?

Eloise opened with: ‘there is stultification whenever one intelligence is subordinated to another… whoever teaches without emancipating stultifies’ (Jacques Ranciere: The Ignorant Schoolmaster pp13, 18)… and went on to consider the different intellectual models offered by Socrates; Giroux, Rousseau and Dewey; Freire; Ranciere; Learning Development; Peer Assisted Learning. Eloise illustrated these models with drawings of different circles, spirals and vortices – and we were invited to produce visual or three-dimensional models for ourselves. Discussing our different illustrations allowed us to make conscious implicit attitudes to teaching and learning to stimulate further discussion on what teaching is for, how we as teachers interact and work with students – and whether teaching can ever be emancipatory. 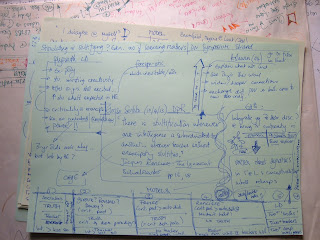 In a dialogic conversation with Eloise, Gert Biesta’s session argued that despite the ignorant schoolmaster:  ‘… Teaching (still) matters in emancipatory education’

Biesta offered Mollenhauer (1968): education is not necessary for emancipation – but it may contribute… and thus considered the education model that would facilitate this. This was a rigorous and stimulating session previously offered as a key note and one that I would love to see again, perhaps at our own L&T conference or even at #aldcon…  The conclusions offered were that what makes us human rather than robots is that we can be addressed, interrupted and taught by others. This is something to celebrate rather than to apologise for. Emancipatory education is not the transmission or revelation of a truth, nor even freeing ourselves from power or an alienated existence – but rather the revealing of an intelligence to itself. It is an emancipation from a self-understanding of being incapable and voiceless – with equality not a product but an underlying assumption. 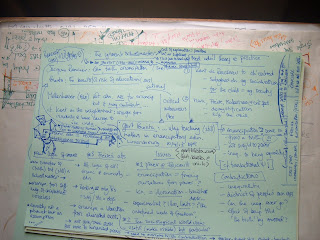 Heneke Jones considered fostering meaningful dialogue and dialogic space in the primary classroom – and in the Education Studies one, with: ‘Dialogue, disagreement and disaffection: squaring the circle’

The opening proposition here was: ‘I disagree with myself’ and Heneke explored philosophical thinking in the primary school as a facilitator for creative thinking within a community of enquiry. She offered a lovely model for generating questions drawn from Baumfield, Higgins and Leat (2001):
Her research explored patterns of dialogue within this mode of enquiry – and I thought that the model for generating questions would work well within University settings. 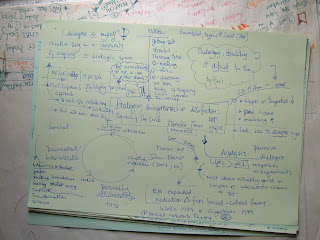 Kassandra from Plymouth Dyslexia Services explored academic reading with students with dyslexia. Her key proposition was that the person with dyslexia is a curious visual reasoner – who is made to feel ‘too stupid to learn’ within the education system. She argued that the dyslexic is consumed by anxiety, exhausted by continuous self-monitoring and the sense that the locus of control for their learning (and their lives) was always elsewhere. I took from it another argument against the imposition of de-contextualised phonics work in the primary classroom – arguing as she did for the need to use whole words that can be understood through context and meaning… 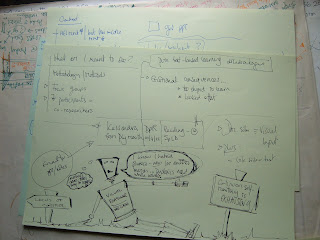 Helen Bowstead, also from , discussed ‘the power of personal narratives to shake notions of the ‘other’’.

Drawing on (2000) and Deleuze and her own excellent work on the power of ‘transgressive narratives’ within HE teaching and research, Helen spoke poetically of ways of working with and understanding our students, including our international students, that enriched all our understandings. She extended this to the research context illustrating how her approach can bring both the researcher and the participant more ethically into the research process. The power of this session was in the poetic extracts that Helen read out – which I do not have – so if this intrigues at all – do search for Helen Bowstead’s ‘writing’ work. 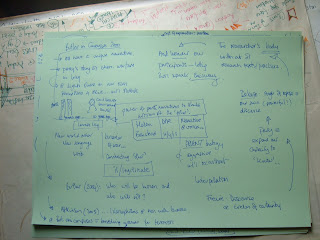 Sandra Birkett from gave a breathtakingly fast and engaging presentation on her work with teenage students: ‘Critical thinking in and on assessments’

Sandra de-constructed and elaborated upon staff expectations of students when they use terms like, ‘You will be awarded marks for:
These taken for granted terms – by staff – have no meaning for most students – even more so in a digital era of super-fast responses, bite-sized learning, multi-tasking and instant-answering. This was no process of dumbing-down but of explication and de-mystifcation that really did seem to empower students to understand what was expected of them. I would like to get the PPT of this session to show to my own University students … 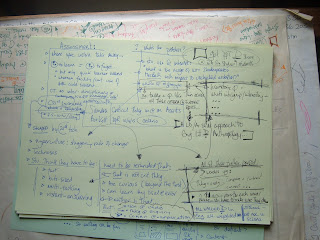 I heard rumblings amongst the younger participants as Julien argued against the privileged position of writing in the University assessment landscape. Writing tasks are proliferating with ancillary writing tasks sprouting like weeds and reinforcing prejudice against those, including those with various SpLDs, who find writing difficult. Julien suggested mildly that all students are offered more choice as to the way they would like to be assessed and asked us to consider how we might challenge the pre-eminence of writing and what alternative assessments might look like. 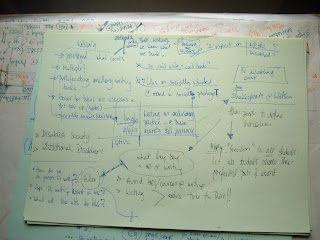 Almost in response to Julien, Zotzman and Hernandez-Zamora from argued for ‘Digital literacy as a tool for self-authoring…’

Perhaps unsurprisingly the Mexican public university system is as divided as the UK one with private universities well-resourced and heavily fenced – whilst the public sector is under-funded and attended by w/class students regulated and controlled by exclusionary practices such that even if they do produce a final dissertation – their voices will never have been heard and will not be visible in their own work. The re-authoring and re-genring work that Z and H-Z undertook with their students drew on Bakhtin (1981), Kress and Van Leeuwen (2001) and Kress (2010)  - arguing that words are only our own when we populate them with our own weight and that the affordances of multimodality offers agency, voice and expression… Examples included producing illustrated A-Z after Dahl and seemed to have empowering and transformative effect. This is another PPT that I would like to get so that I could under-take such work with my own students. 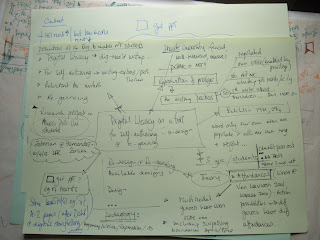 Choi encountered resistance when seeking Hong Kong w/class students to write autobiographically of their educational experiences. The power of this session, as with Bowstead’s, came from the poetic power of the student voices. Heartbreaking to hear the implicit internalised self-loathing of: ‘I got no cultural capital from my parents’. These bleak and desolate, to me, autobiographical extracts illustrated again the symbolic violence enacted on more communal and collective social groups when engaging in neo-liberal, individualistic education systems. 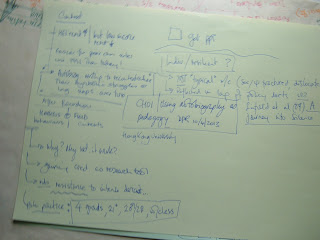 devised a range of creative, very short writing tasks for his students – the 300 word essay, the 120 word short story, the eight line detailed argument… An analysis of the student writing revealed the potential of these short writing tasks to engage and challenge the writer – to provoke and produce inspired and inspiring writing – and to reveal the potency of academic and professional literacies to even foundation students. We participated in group writing as part of the workshop – struggling to produce sixty words to answer an essay question on the positive nature of luxury – the other table were arguing for the luxury of freedom. It was truly engaging and stimulating to draft and re-draft – to really shape and craft – an answer in so few words. Again, I have discovered an emancipatory practice – I have never seen an activity deliver so well on the intended promise. 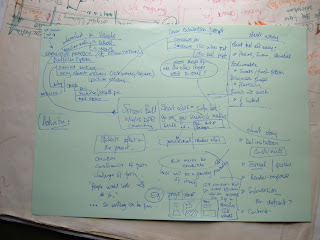 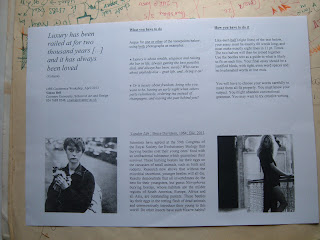 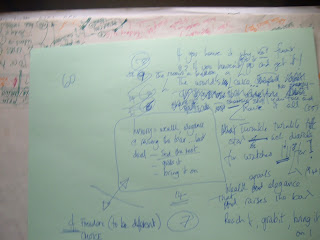 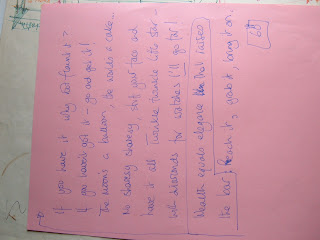 Our session followed and concluded the Conference. We argued for the virtual as a ‘third space’ with emancipatory potential for teaching and learning. and our sessions complemented each other – and we hope to work with in some way as an outcome of the Conference.

Our proposal was predicated upon our belief that Education is in transition - commodity driven, marketised, rationed and controlled in ways that we have arguably not seen since the days when only the ‘top’ seven per cent went to University.  And wondered how can we be challenging, creative and yet more inclusive in these ‘interesting’ times. Winnicott (1971) argued that play is important in counteracting the implicit threat that occurs when we are in transitional spaces – between worlds, between social classes and in alien educational settings.  We wanted to see if we could playfully:
We created alternative educational spaces in Second Life, a 3D immersive world (www.secondlife.com), to see if students inhabited these disrupted spaces in more powerful ways than the traditional lecture hall or seminar room. Our educational landscape became a seashore with sussurating sea, deck chairs, bonfires and puzzle cubes. We found that our students appeared as Bee or Klingon as well as ‘Barbie on the Poop Deck’ – and argued that disrupted pedagogic space can allow for more powerful student agency… Our more recent work (elaborated upon in the blog post below) argues for creative pedagogy and assignments – including the design and production of digital artefacts as alternative, empowering assignments.

I found this DPR really engaging, exciting and inspiring – I left with memories of creative and stimulating people and practices – with so many new things to do and try out and – hopefully – with a few more people out there with whom I might collaborate and cooperate in the future.